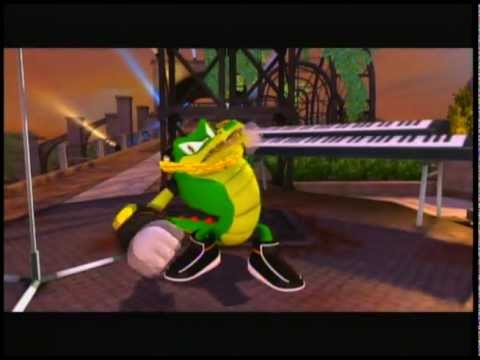 This is probably the least traditional challenge in the whole game in that the whole thing is set around a small area: Vector the Crocodile has set up a stage to play his music in on the Spagonian aqueduct, and Sonic has to play catch with an eighth note Vector generates. The goal is to cause Vector to lose a beat.

To send the note back at Vector, use the Homing Attack on it, Of course, Vector is going to bounce it right back. You may be wondering how there can be a time-based S-Rank on a challenge like this, whose victory seems random by nature. It actually isn’t. After you bounce a set amount of the music notes back at Vector, it’ll turn yellow. After some more, it’ll turn red. Then, it’ll move so quickly Sonic can bounce it twice before he lands, causing the note to appear right next to Vector and cause him to mess it up. So basically, the key here is to bounce the hot potato back at Vector as quickly as possible.

The mission makes a lot more sense once you learn that Vector will mess up after a fixed number of deflections. I know a lot of people aren’t too clear on what you’re supposed to do here or that they can’t get the mssion to work–perhaps this will provide some help.